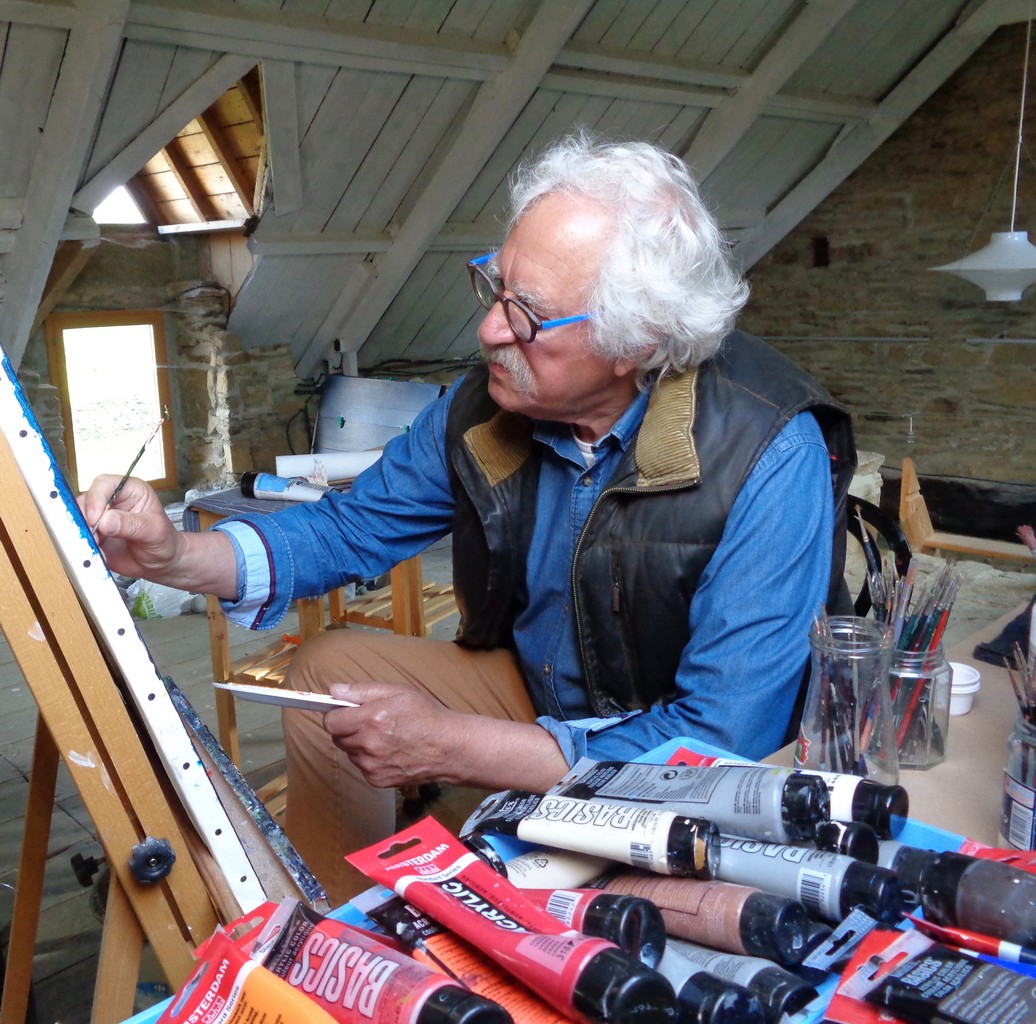 Henk Meeder, Visual Artist. Born in Schiedam (The Netherlands), in 1942. After secondary school Henk worked as an advertising, decoration and décor painter. In the evenings he studied at the Academy of Visual Arts in Rotterdam. During the first 3 years Henk studied Publicity and followed this by a further 6 years of training in Free Drawing, the Art of Painting and Graphic Arts. He successfully graduated in 1967. Subsequently Henk was for quite a long period manager of an advertising agency and thereafter he worked as a graphic designer and illustrator for the food industry. In between working he was a visual artist. Initially Henk was working with pen drawings in black and white and shades of grey, inspired by the Cosmos. Continuing with paintings of a similar genre he then completed a series of colourful watercolors of impressions inspired by his holidays. He has had several exhibitions in the Netherlands. Whilst on holiday in France in 1996, Henk and his wife Corrie discovered Brittany for the first time and fell in love with the area. This experience inspired many more holidays in Brittany where they made good friends. Henk had the opportunity of a six month stay in Brittany and lived in a manor house belonging to their good friend Nicole van der Kerchove. This was where he laid the foundation for his current works. He took his inspiration from the beautiful coast, the rocks, the locals and largely by the beautiful stones (galets). During this period, he had his first solo exhibition in Bretagne in the beautiful Palais Épiscopal in Tréguier, and this holds positive memories for him. In 2004 Henk and Corrie decided to leave the Netherlands and settle permanently in Brittany. After a long search they found an old farmhouse in the commune of Brélidy, not too far from their beloved coast. From then on Henk received numerous invitations to exhibit in various venues throughout Brittany. He exhibited three times at the ‘Biennale 'Peintres et Sculpteurs de Bretagne', which is known as the largest and most important Visual Arts Fair in the region. His recent work is mainly focused on the surface structure and colours of the stones found on the nearby coast. In addition, he still paints watercolours of local boules players and all kinds of nauticalia.